I, the Jiang Shi

The 31st of October! Halloween!  The night when graves and tombs creak open and ghosts float through the air.  Actually, not all ghosts will be floating.  Some will hop, probably on one foot.  They will be Chinese ghosts, known as the Jiang-Shi, more akin to re-animated zombies or vampires than bodiless  souls wandering the earth.

According to Chinese mythology, people buried far from their place of birth cannot rest peacefully. They dig their way out of their grave and try to get home.  The longer the journey, the stiffer the corpse gets.  Rigor mortis sets in so after a while, the ghost cannot move its limbs.  It is forced to hop.  Often one legs falls off and gets left behind.  Most Jiang Shi arrive back home with only one leg. Sometimes even people buried in their own village become hopping ghosts.  This usually happens because a black cat [click here for more black cat folklore] crosses their grave, or the tombstone is hit by lightning on the first night after burial.

Hopping ghosts look horrible.  They tend to have green skin, due to the fungus growing on it.  Sometimes their eyes might fall out.  Their hair is always white, no matter what colour it was when they were buried. Their nails keep growing, and these are their main weapons when they attack a living person. If a hopping ghost comes across an unsuspecting human being, it sucks his blood to try and get some life force back into its limbs.

It is said that hopping ghosts cannot see.  But their sense of smell more than makes up for the lack of sight.  They can smell human breath from a long way, and they hone in on it with alarming speed.  Many ancient bridges in China were built zigzag rather than straight to confuse the blind ghosts. 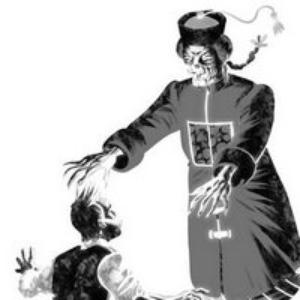 You will surrender your life force.

So how could you defend yourself against a hopping ghost should you have the misfortune to bump into one this Halloween? According to learned mystics from the Fujan region, you could douse the ghost with vinegar or the blood of a black dog.  They have the same effect holy water has on vampires, that is they scald them. You might also try fooling a hopping ghost into looking at its reflection in a mirror.  An eight sided Taoist mirror works best if you can get hold of one.  The sight of its own hideousness is believed to make the hopping ghost pass out.  This would give you time to run it through with a sword made of polished pear wood. If you are squeamish about killing ghosts, you can surround them with a circle of sticky rice or beans.  When they come round, they would be unable to step over it. Or you could try pasting a prayer written on yellow paper to its forehead.

If you don’t manage to kill or subdue a hopping ghost, the next best thing is to keep it at bay till the cocks crow.  Hopping ghosts are terrified of the sun, and the approaching dawn will send them scurrying into a dark place to hide.  Until tomorrow night……Happy Halloween!

Don’t Slam the door – the Ghost in Dornoch Cathedral, Scotland